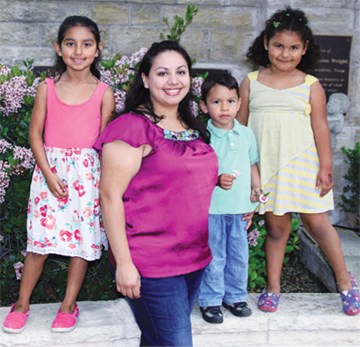 Yvette never thought of herself as a handy person, but after years of trying to “fix” dysfunctional relationships, emotional hang ups, and her family’s future, she’s well acquainted with repairing and healing brokenness.

The past three years have been a bumpy road toward stability for her family, but her time with Texas Baptist Children’s Home’s Family Care Program helped get her back on her feet.

With problems in her marriage, Yvette recognized that her kids would be better off if they were separated from the conflict between her and her husband. When the marriage ended, she says she felt God’s peace.

Her family was gracious enough to take her in, but after a few months in a cramped, hectic house, Yvette knew she had to change her situation.

“I was trying to find housing or programs or something to get into just so we could start fresh when I found TBCH and applied. Two months later I was walking through the door of a cottage.”

For most of the moms coming into Family Care, the idea of living in a group situation is daunting and anxiety-inducing. Many don’t know what to expect and are pleasantly surprised when they find that the program is like nothing they’ve witnessed before.

“The night I arrived at Family Care, I was so nervous but when I looked over and saw my kids asleep in their own beds in our own room, it was like I could breathe for the first time in months. It was a relief,” she said.

Yvette quickly noticed a positive change in her three children, as well.

“My kids never called the cottage anything but home. They considered the other moms and kids their family. They felt safe and taken care of, and were able to thrive because of it,” she said.

Yvette used her time at TBCH to not only take care of her family, but also herself. Although she was uncertain that she’d be accepted, her father encouraged her to apply to Austin Community College’s nursing program. She took his advice, was accepted, and will graduate this May.

“School, work, saving money, daycare, all of it was tough,” she said. “There were times that it was very difficult to keep everything together and then I was reminded by my Family Life Coordinator that I was okay, that I had a home, I was getting an education, and I had people to support me.”

Yvette also took the time to heal emotionally and spent six months in counseling, trying to work through her problems. She credits her time spent with the other mothers as the extra boost she needed to get through school.

“At night after the kids were asleep, the moms would pop some popcorn and watch a movie in the den or just sit back, unwind, and talk with one another. It felt fun and comfortable, like I was a part of some sorority and all the moms were my sisters.”

Now that she’s moved out of the cottage and transitioned into independence, Yvette feels stronger and better able to handle her family’s future.

“I see the other women in my apartment always asking if someone else can fix this or that. I don’t do that anymore. I learned a long time ago that if something’s broken, fix it,” she said. “With faith in yourself and in God, you don’t have to wait for someone else to come along to do it for you.”