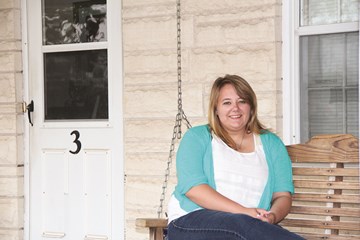 Calm and composed, Megan wouldn’t seem like a teenager with any past trauma. But like most of the children at Texas Baptist Children’s Home, behind every smile is a story.

As she approached her high school graduation in June, Megan took time to reflect on her last three years as a resident of TBCH’s Campus Life Program. Although she described her initial reaction as “difficult,” once she learned to open herself to what TBCH had to offer, she started to grow.

“No child wants to ever come to a place like this, so I was very unhappy at first. I was one of the older kids in my cottage and had this responsibility thrown on me to set an example. I didn’t care about that. I wanted to do what I wanted to do, but I learned that’s not how a family works,” she said.

Megan found that once she took to being a role model, many of the younger kids in the program began to look up to her.

“They’ll ask me questions or for help just like a big sister. I didn’t like it at first, but now I know I’ll miss it,” she said.

After graduation, Megan hopes to move on to the TBCH Independent Living program and work full-time for a year. Eventually she plans to go to pursue a career in nursing.

“I’ve known for some time that I like taking care of people,” she said, “but the people here helped me believe I could actually do it.”

She cites the campus youth minister, her counselor and her house parents as just a few of the individuals who helped her grow and heal. Nancy Gage, Campus Life Supervisor, witnessed firsthand the positive effects on Megan.

“She is encouraged and is looking into a CNA job at a nursing home. As she matures, she is learning to lean on the support she has received through TBCH and others, and face the future with courage,” Nancy said. “The future can look pretty scary if you aren’t sure you’re capable of making it on your own, but we want her to know that she’s not alone, even after she leaves the Campus Life Program.”

“I’ve definitely learned a lot about myself, others and God here. It’s stuff I’ll use forever,” Megan said.

Megan knows her healing process will help her relate to and comfort children with similar circumstances in the future.

“That’s why I want to do nursing. I want to help people heal. I can’t pay back everyone who’s helped me, but I think they’d be happy to see me share what I was given,” she said.

Knowing that one chapter of her life is coming to an end; Megan is as excited about her future.

“When I think of how I felt when I came here and how different I am now, I get such a good feeling,” she stated. “My story’s just starting but I’ll always remember this place as a blessing."