More Than a Game 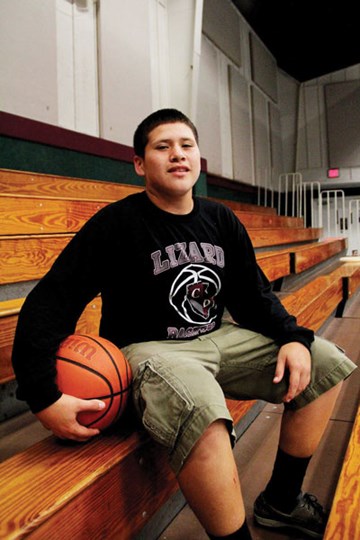 He stood in front of the basket, weighed the ball in his hands, and closed his eyes. For a moment, the noise, the people, and even the room itself drifted away.

“Take a deep breath and shoot,” he said to himself. From the bend of his knees, he felt the ball release as it left his fingers.

The ball swished through the basket, but he wasn’t satisfied. He had to make one more. Always just one more.

Family dislocation and distress brought 12-year-old Kenneth to Texas Baptist Children’s Home in 2012. After his family was evicted from their home and he was expelled from school, he made a habit of staying out all night with less than ideal friends.

“After school I could go out and do whatever I wanted. I loved that freedom because I was in charge. I knew I wouldn’t have that here,” he said.

His mother contacted STARRY’s SAFE Program because she knew Kenneth needed to change his ways. When he arrived, his caseworkers realized he needed the kind of support the Campus Life Program at TBCH offered.

Once Kenneth was on campus at TBCH, he was immediately met by the challenge of accountability. Before he came, he had assumed the role of a rash, young adult – but on campus, he was expected to be a responsible young man.

Kenneth and the other boys in his cottage had schedules for each day. School and activities that they took part in dominated their time. This setup was meant to offer consistency and comfort, but it wasn’t comforting for Kenneth. It felt confining.

“I would take out my frustration on everyone and everything that I could. I had a lot of hate in my heart,” he said.

In his heart, he knew that TBCH was much better for him, but the whirlwind of emotions he felt left him restless and confused.

He wanted his freedom back.

Feeling trapped by the structure of TBCH and the feelings boiling inside of him, Kenneth looked for an outlet.

“I liked school, but it didn’t help me get rid of all my negative feelings,” Kenneth said.

In the after-school recreation program at TBCH, Kenneth found what he was looking for.

“A basketball rolled over to me and it just felt different,” he said.

The ball was in his court. Kenneth took it and ran.

At first, he just played games with the other boys. Then he started practicing his shots by himself. Before long, he started playing at school and got picked for the team.

“I had played basketball before, but it was different this time. It was more than a game for me,” he said.

After three months, he began to realize that his house parents weren’t wardens of a prison, but rather, loving caregivers who wanted the best for him. Things started to turn around.

“There weren’t any fights with the other boys in my cottage anymore. I left everything on the court,” he said.

He began to recognize that the freedom he once had wasn’t really freedom at all. Now, instead of staring down at his shoes with a furrowed brow, he looks forward to his bright and hopeful future.

“I want to go to Duke and play. I didn’t think of stuff like that before. Now I know I can."