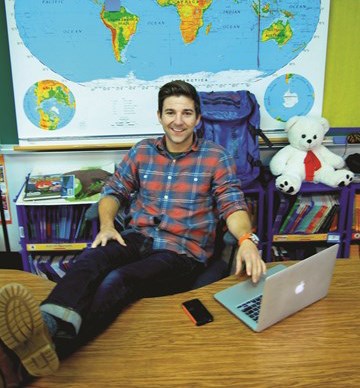 Chris has always been one of the most intriguing of Texas Baptist Children’s Home’s prodigal sons.

In and out of children’s homes since he was a child, he was just a fifth grader when he landed at TBCH, where he stayed through high school. Armed with an ingratiating personality and a rib-tickling sense of humor, he was an unforgettable and much-loved character with a bit of a wayward streak.

While growing up, Chris lived in the Campus Life and Independent Living programs at least three different times. He had a short stint at an area university and was homeless for a period of time. Always outgoing, he even tried his hand at stand-up comedy and acting in community theater productions.

Finally, in 2010, he was admitted to the theater program at the prestigious Emerson College in Boston, Massachusetts. Entering the program was something of a gamble for Chris in the eyes of those who had watched him take two steps forward and one step back for so many years.

But the investment has paid off and today he’s come back to his roots in Texas, armed with a freshly minted degree in theater education, with an emphasis in performance: acting. “It means I’m a glorified story teller,” he said.

Today, he is searching for the next step of the journey God has for him. “I’m not going to get very far without God, so I have to trust Him about what the next step will be,” he said.

Chris is a few years older and a little wiser since he left for college in 2010, and still deeply introspective. College life in the northeast expanded his world view, introduced him to different perspectives, and tested his own belief system.

“My faith was tested like never before,” he said. “Seeing other people’s world views and experiencing how other people choose to live their lives, it really caused me to look deeper into the things I believe, to ask ‘Do I really believe this?’

“It challenged me to re-think everything about my faith, about my God. As difficult as it was at the time, I am really thankful for it now because it taught me to really own my faith and own what I believe in. And not just own it, but live it. It really did make me stronger.”

In an interview before he left for college, he said he felt called to use his gifts to lead others to Christ. Now he’s not sure he had that quite right.

“I came away from Emerson with a stark realization that it’s not as much my job to lead people to faith as it is to point people to Jesus,” he says now. “I spent a lot of time and energy trying to lead people to a God that they didn’t want to have anything to do with.

“I was trying to lead people to Jesus and not all of them wanted to follow me. That was one of the biggest tests I faced,” said Chris, who is attending The Austin Stone Community Church.

Since coming home to Central Texas, Chris has been working as a substitute teacher and with Ascend Outdoor Adventures, a Christ-focused recreation ministry, while he looks for opportunities to minister and serve.

“When Jesus called Peter, He called him to be a fisher of men,” Chris said. “There are people in this world that we are called to reach and be a light for. Only God knows who they are. My prayer since I got back is for God to use me. Big or small, I’m in.”