An Irrational Kind of Love 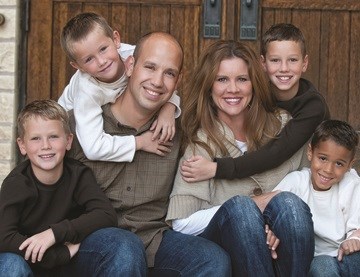 Saying “I love you” doesn’t come easy for 7-year-old Trevor. Until recently, his young life was filled with foster homes and rejection, so it was no wonder he resisted saying the words. But thanks to a loving forever family, he’s learning what they really mean.


Scott and Gretchen Alarcon were raising three boys, ages 11, 9 and 5, and praying about whether they should consider adopting another child. The idea came naturally to them; Gretchen was adopted at 13 by her stepfather and Scott grew up with 17 foster siblings.

During a New Year’s Eve party, Gretchen and Scott met Trevor, who had lived in seven foster homes. He was being fostered by friends who had decided not to pursue adoption.

“I just remember Scott and I watching him and saying, ‘Wow, I wish we could adopt a kid like that,’” recalls Gretchen.

After praying about it, the Alarcons, members of First Baptist Georgetown, decided that they would like to adopt Trevor. But the road ahead was anything but certain. The Texas Department of Family and Protective Services would select the adoptive family and the last time Trevor was up for adoption, 200 families were interested. It seemed like it would almost take an act of God for them to be successful.

Scott and Gretchen visited with STARRY Foster Care staff to see if they could help. They were willing, but STARRY President Don Forrester, knowing the TDFPS system and the adoption process, cautioned that unless God intervened, the placement probably would not happen.

That was fine with Scott and Gretchen. They acknowledged their total dependence on God to do His part and immediately began doing their part to become qualified foster parents with the intent to adopt. Working with STARRY, they had all their paperwork turned in, their home study completed, and their inspections finalized within three weeks, a process that normally takes six months.

Because Trevor was being fostered by a family they knew, the Alarcons set up play dates with him and their three boys. Scott and Gretchen never shared with Trevor or their children their intent to become adoptive parents because they did not want him to be disappointed if their adoption effort was unsuccessful.

The Alarcons applied for special consideration so they could adopt Trevor before he was available to others, but the request was denied. That meant they had to compete with other families who wanted to adopt him.

That reinforced what Don Forrester had told them — only God could make this placement possible.

“Scott called it an irrational kind of love,” Gretchen said. “Our determination to have Trevor in our family made no sense. We loved him like he was ours already before we even really knew him.”

Last year on May 25, their prayers were answered. Gretchen was on her way to pick up her kids from school when she got a phone call from Stefanie Miller, STARRY’s Foster Care Coordinator, saying they had been approved to adopt him. Last November, it was made official in a courtroom ceremony, making a forever difference for Trevor.

“He changed after that,” Gretchen said. “His counselor said that a light came on inside of him because he finally felt safe.”

Trevor is working hard to overcome emotional and academic challenges associated with his early childhood years. He holds tight to the few possessions he brought with him, like a special towel. Learning to share has been a struggle, but every day there is a new victory in the Alarcon household.

“We keep trying to beat dates,” Gretchen said. “When we reach six months that will be the longest he has lived somewhere. We’re going to celebrate with him. That is how we measure success right now.”

Among Gretchen’s prayers are that Trevor will overcome his trust issues, become closer to Scott, develop a relationship with the Lord, and improve in school.
And then, of course, there are those three little words.

“Just based on what I’ve seen since June of last year, I believe Trevor is going to say ‘I love you’ more,” she said. “And that’s going to be huge for him and for us.”