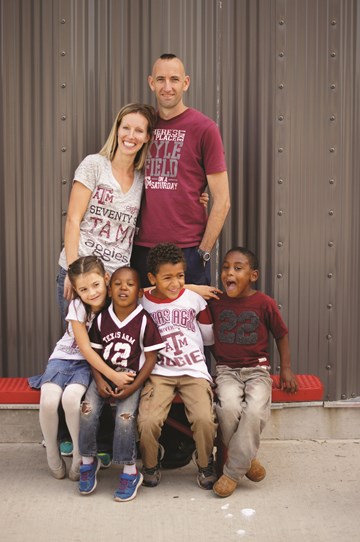 Six year-old Issac Andes lies in bed as his mother, Amanda, tucks him in for the night. She leans in for a kiss and a sly smirk eases across young Issac’s face. He looks across the room to his father, Jon.

“Look Daddy, I’m giving your wife a kiss!” he brags before throwing his arms around Amanda and attacking her with his lips. He kisses her on the cheek, the nose, and the forehead. Between each display of affection is the sound of laughter.

This is Issac. He is the lover in the family and the first of four children adopted through STARRY into the Andes family household. Issac was adopted in March 2010. His sister Ainsley, also 6, was adopted just five months later. The two siblings quickly formed an inseparable bond.

“Never have I met a kid with a heart that Issac has,” Amanda said. “He loves people, he loves helping and he loves his family. He is seriously a jewel.”

For the next two years, Amanda and Jon continued to foster children through STARRY while enjoying the time with their new family. Their hearts still longed to expand their family and Amanda prayed for God’s guidance. If they weren’t to pursue adopting more children, she and Jon wanted some peace of mind.

But the peace never came.

“We kept feeling like there were other kids that God wanted in our family,” she said.

The Andes called STARRY to give notice of their availability for any children seeking adoption. Because they had adopted two local children already, Amanda and Jon doubted the likelihood of their being chosen as parents again. They still believed the Lord was calling them to grow their family, but how?

They began to consider the possibilities of an international adoption, but God had other plans in mind. Within a week of their decision, the Andes received the phone call from STARRY that they were on the final list for two little boys, Eli and Canaan.

“As soon as we stepped out there and said, ‘Whatever you want, God. We’re willing to do whatever we have to do,’ we got a phone call,” Jon said. “It was one of those times where you know that it was God who answered what we were going through at the time.”

In October 2012, Eli and Canaan were adopted into the Andes family. The addition turned Issac and Ainsley’s world around. Ainsley now had to learn to share her beloved big brother. Issac, being the lover that he is, embraced his new role. In a casual display of brotherly duty, Issac asked his dad where he could find the vacuum cleaner to pick up after his siblings.

“It’s not my mess, but it’s my responsibility,” Issac told his dad.

Amanda said that Issac and the rest of her children have taught her more about herself and about love than anything else.

“If it wasn’t for my kids, I would have never changed or wanted to change into the person God really wants me to be,” she said.

Amanda admits she is still learning how to handle the different personality types, and about emotionally being able to handle the children asking about their biological parents.

“I’m still learning how to be okay with that,” she said, “but how awesome that I get to learn that. Not everyone gets this opportunity.”

As for the kids, they are currently learning how to raise chickens and milk goats at their country home north of Georgetown. However, the most important lesson Jon and Amanda say they are trying to teach their children is that of God’s love.

"No matter their past, future, or how they are treated by others, I want them to know they never have to doubt the love God has for them," Amanda said. "May they always feel the security in knowing that their heavenly Father loves them."