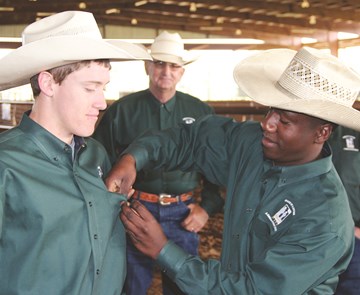 Rickey and Troy are very different personalities – Rickey is outgoing and Troy is reserved – but they share a common belief that even if you take the boy out of Miracle Farm, you’ll never take Miracle Farm out of the boy … or the man.

“This was the turning point in my life,” said Troy, 18. “This place helped me get my wings. I’ll take with me an all-go, can-do attitude. I learned that here.”

Troy’s confidence is echoed by Rickey.

“I learned things that not just a young man would do, but what a man would do,” said Rickey, 17. “Miracle Farm changed my life and helped me become a Godly man.”

Troy arrived from East Bernard in June of 2010 and Rickey from Tomball five months later. This August, they will graduate together from the Farm’s on-campus high school.

Perhaps most impressively, both boys were selected to carry the American flag at the annual Miracle Farm open house, A Day At Miracle Farm, Rickey in 2012 and Troy in 2013. There is no higher honor a Miracle Farm boy can receive.

Both admitted that they would hardly recognize the boys who arrived at the Farm three short years ago.

“I was a young man who needed direction,” said Rickey. “I was struggling to find out who I was and who I needed to be.”

He credited his house parents, Chris and Renda Welch, with shaping his view of what the future might hold for him. “Words can’t express what they have meant in my life,” he said. “Mr. Chris is an example of what a true man after God’s heart is and is like a father to me.”

“Miracle Farm really was a fresh start for me,” added Troy, who also praises the influence of his house parents, David and Gayla Jones. “My foundation was really shaky. I was like a dog on a leash, fighting everything, because I wanted to do what I wanted to do first. I was able to strip away the old foundation and level the house, then rebuild it.”

Because they’ve been here longer than most of the other boys, Rickey and Troy find themselves looked up to as role models.

“I don’t like to hold myself higher than anyone else,” said Troy, “but I try to lead through example. If there’s something that needs to be done, if I start doing it, pretty soon the younger guys will see what I’m doing and join in. They learn that you need to lighten up and let the program do the work.”

Rickey noted that all of the boys in his cottage are much younger than he is. “I tell them that what you were doing before wasn’t working. Nobody here is going to change you. It has to be God working through you.” He likes to cite Joshua 1:7 as a life verse for himself and guidance for other boys.

“Be strong and very courageous. Be careful to obey all the law my servant Moses gave you; do not turn from it to the right or to the left, that you may be successful wherever you go.”

After graduation, Rickey plans to attend Blinn College to obtain an EMS certification, with plans to become a firefighter. Troy has been participating in the HVAC vocational program and will pursue that while attending college, then wants to become a Navy Seal.

“Troy has matured so much in his time at Miracle Farm,” said Executive Director Alex Hamilton. “He has become a strong leader on campus and a young man that will make a positive difference in the world.”

“Rickey has overcome many obstacles to get to where he is today,” Alex added. “He is a picture of the power of God’s grace when combined with hard work.”

The boys have plans to pay forward all that’s been given them.

"I’ve gotten multiple chances in life and if I can help another young man in the future, that will help make sure I am a Godly person,” Rickey said.

“I can’t imagine a time when I don’t come back to Miracle Farm,” said Troy. “I got my wings here and I know God will want me to help somebody else get theirs.”