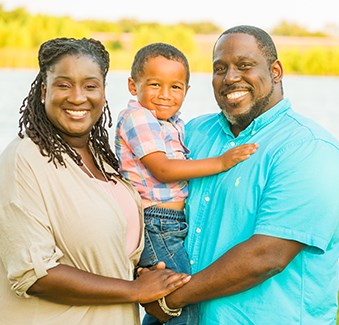 After meeting on the second day of classes in 1994 at the University of Maryland, Baltimore County, Debra and Greg became friends, fell in love, and married in 2001. They always knew they wanted a large family but, as they were settling into their careers, they decided to wait five years before trying to have a baby. When they did start trying to grow their family, it began a long, painful road of infertility that lasted more than a decade. After multiple IVF treatments and miscarriages, they were emotionally exhausted. “I felt like we were called to adopt, but we just couldn’t see it through the heartbreak of infertility,” Debra says.

The year that Debra turned 40 years old, they decided to stop trying to get pregnant and start pursuing foster care and adoption. They met with STARRY to learn how they could get involved and make a difference in the life of children who needed safe, loving homes. In January 2017, they began training to become foster care parents. “Just learning about what some of these kids go through broke my heart,” remembers Greg. “In that moment – during that first training session – I knew this was exactly where we were supposed to be.”

After completing their certification, Debra and Greg had two boys placed in their home who were able to be reunited with their biological family. Shortly after their first placement, their STARRY caseworker called about an 18-month-old little boy and they quickly agreed to open their home to him. The following Friday night, their caseworker knocked on their front door with the sweetest, cutest little boy by her side and DaMauri was welcomed into their house with open arms.

During his first night with Greg and Debra, DaMauri was completely silent. Unlike most 18-month-olds, he didn’t babble and talk, nor did he make any sounds when he played with his toys. Suddenly placed in a new environment with unfamiliar faces, he seemed hesitant to engage and open up to his new foster parents. Instead, he quietly observed and took in all of his new surroundings.

However, during the course of the first few weeks in their home, DaMauri began to bond with Greg and Debra. Their home and daily routines became familiar to him and, as they continually loved and cared for him, he began to feel safe and comforted. “It wasn’t long until he became a fun, talkative little boy. He really loved our family dog and, believe it or not, he actually spoke his first words to the dog, not us!” says Greg, laughing. Slowly, DaMauri started to trust as he began to talk and express himself more and more.

At each routine meeting with their STARRY caseworker, Debra was reminded of how much progress DaMauri had made since coming into their home. “Every time we went for a meeting, he would talk and laugh and play right up until we walked in the door. The second someone he didn’t know came in the room, he would just go completely silent,” she remembers. “Then, when we left, he’d start right back up as soon as we got into the car. To me, it was evidence that he was comfortable with us and had developed a healthy attachment.”

During the year that they cared for DaMauri, he seemed to naturally fit into their family so well. “He went to church with us and to daycare during the week while we worked. He got to know all of our friends and community and just fit in perfectly,” says Greg. When they found out that they would have the chance to adopt him, they knew that they wanted DaMauri to be part of their forever family and his adoption was finalized in August of 2019!

Now a bright and curious 3-year-old boy, DaMauri is thriving in his Montessori school where he has lots of friends and enjoys getting to learn new things each day. The silence that once filled Greg and Debra’s home has been replaced by laughter, giggles, and lots of talking.

“This has been a long road for us and our lives are so joyful because the Lord gave us DaMauri,” Debra shares. “I can’t imagine our lives without him.” In the journey to foster and adopt, Debra and Greg knew that this wasn’t something they could do alone – they needed the support of friends, family, and community. Through their foster care training at STARRY, they were able to meet other foster parents who had walked this road before them and who offered insight and guidance that they needed. During the difficult nights and hard seasons, these fellow foster parents and the STARRY foster care staff were the ones who Debra and Greg looked to for reassurance and encouragement.

“Our families are a big part of our lives, too,” says Greg. “They have been with us every step of the way. But in the back of my head, I wondered what it would really be like when our families met our adopted son. Would it be the same as if he was our biological child? Let me tell you – from the second they laid eyes on DaMauri, they fell completely in love with him. He is our son, fully and completely. And that will never change.”