The Journey to a Better Future 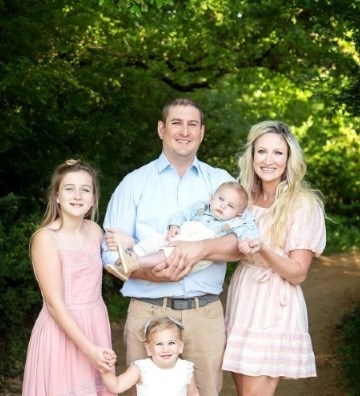 Even in the midst of the foggy, sleepless nights with a newborn, Sam loves having a family. He goes to work during the day while his wife, Amanda, stays home with their three kids, and each night he comes home to see the faces that he loves the most. With a successful career in engineering, it’s easy to assume that Sam’s life has been easy. But when you sit down and talk with him, you find out that it was quite the opposite.

Sam’s story began like many others. Adopted as a baby, he was raised in a stable, loving home with parents who adored him. As he grew up, they provided everything he could possibly need and devoted themselves to being the kind of role models that he could learn from. By following their examples, Sam learned how to show respect and love others well. “My father taught me the value of working hard at an early age, both in sports and at home,” he says. “I still remember him roofing our house and working on every car and lawn mower we had. I always wanted to help.”

However, during Sam’s pre-teen years, his normal, balanced lifestyle turned upside down. In middle school, he had made friends with some of the more rowdy and rebellious kids who had a distinctly negative impact on him. He began to buck against authority and rebel in ways that his parents had never seen before. Deep down, an anger burned in Sam’s heart and began to take over his life. Before the end of his eighth-grade year, Sam had been removed from multiple schools and his parents had exhausted every effort to help their son get back on track. It seemed like there was no doctor, counselor, or alternative school that could help right what had gone wrong.

Just when Sam’s parents had begun to feel like there was no hope left for their son, they found out about Miracle Farm. Feeling an immediate peace and knowing that this was a place where he would thrive, they brought him to the Farm in the spring of 1999. Sam was introduced to his new house parents as well as the other boys who lived in his cottage, who seemed nice enough. Although he’d never had much of an interest in animals before, he was assigned a horse named Iceman to care for during his time in the program. In the mornings, he would clean out Iceman’s stall, feed him and, over time, he learned to ride and rope on his horse. During his time at Miracle Farm, Sam also learned how to work with his hands. He worked on engines and learned how to operate a tractor, bale hay, build wooden beds, mend fences, and a variety of other things.

The structure and stability of Miracle Farm was good for Sam’s troubled mind. He developed a deep bond and trusting relationship with his house parents and was surrounded by a group of young men who were striving to grow and change their lives for the better, right alongside him. Caring for Iceman helped Sam develop a new understanding of personal responsibility and learning to work with his hands helped him concentrate his energy on what was right in front of him. Instead of being distracted by others and getting into trouble, Sam put everything he had into his projects.

After successfully completing the residential program at Miracle Farm at 16 years old, Sam moved back home and was able to re-enroll at his local school. After school each day, he would do his homework and then head to work. During his high school years, he worked as a ranch hand, took random lawn care jobs in the community, and worked at a local golf course. And he still tried to fit in time for roping every chance he got. Keeping himself occupied and imploring that amazing work ethic he’d learned from his parents, Sam stayed out of trouble.

After graduation, he was accepted to Tarleton State University in Stephenville. He worked hard at his studies and, during his second year of college, he was hired by an engineering firm. He worked there for the next two years and enjoyed it so much that he decided to change his major to engineering and pursue it further. Just as he approached graduation, his college was denied their ABET engineering accreditation. Sam was faced with a choice: graduate from Tarleton State and possibly never get his engineering license, or transfer to an accredited college and retake all of his junior and senior level classes. Thanks to the wisdom and guidance of his parents and the staff at Miracle Farm, Sam was able to make this big decision with confidence in the future.

In December 2006, Sam went to the University of Texas at Arlington, where God provided a job with a major engineering company in Dallas. “The Lord was so gracious to me and His timing was perfect,” he says. He was able to work full-time while he re-took his upper level college classes. After graduation, Sam went on to obtain both his professional engineering license and his professional land surveyor license. Now he has a successful career with Thalle Construction and currently leads two offices with more than 250 employees. “My time at Miracle Farm helped set me up for a better future,” Sam explains. “I wouldn’t be where I am today if it hadn’t been for the people who invested in me and helped me work through some of the toughest seasons of my life.”