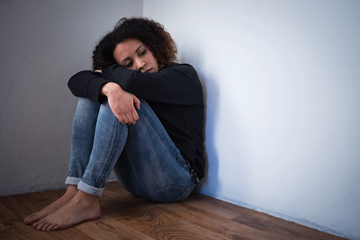 Isabel distinctly remembers the first time that she hurt herself. Her parents were fighting in the next room and, as tensions continued to rise, she needed to feel some relief. As she listened to them argue, she began to picture all of the ways her life could change. Her mind created a whirlwind of questions: Do they even love each other anymore? What if someone gets hurt? Would they ever split up? What would that mean for me? With each question, the pit in her stomach grew deeper. Her heart started racing and she could feel beads of sweat forming on her forehead. Isabel didn’t understand why she felt so weak all of a sudden, but with shaky hands she reached for the knife … because anything would feel better than this.

She continued this cycle for years to come, hiding the box of sharp objects under her bed to use when she needed them. Isabel was afraid to tell her parents because she didn’t want to get labeled as “attention-seeking” or “suicidal” as so many of her peers had been called when other people found out about their cutting. Truthfully, she didn’t want anyone to know. Attention was the last thing she wanted. Why expose the shame? She was so embarrassed, but didn’t have another answer. For her, she never intended for it to be more than a way to make that pit in her stomach go away.

At 15 years old, she finally cut herself too deep. When a friend noticed her scar, she recommended Isabel to STARRY Counseling for help. Through therapy, Isabel learned what anxiety was and that those moments leading up to her cutting were actually panic attacks. She learned that anxiety happens to all sorts of kids. In fact, anxiety is one of the most commonly diagnosed disorders in children in the US (4.4 million) and that more and more kids just like her are beginning to experience symptoms of anxiety (7.1%, up from 5.5%).* Isabel found out that more than half of US adolescents have engaged in some type of self-injury to alleviate the pain they were feeling inside. Her feelings of shame and embarrassment began to give way to the feeling of hope.

Isabel’s counselor at STARRY talked to her about how self-harm usually happens for a variety of reasons. According to her counselor, emotions can be so powerful that they need a physical release and self-harm is sometimes used to feel control over your environment, distract yourself from difficult circumstances, or make you feel alive again when you feel numb. Isabel learned that continued self-harm could increase her risk of major depression, addiction, accidental injury, infection, and suicide. She began to see that it wouldn’t actually help her with the fear she experienced when her parents fought. Isabel worked with her counselor to put meaningful words and expression to her fear and release the pain and tension she felt on the inside in a healthy way that kept her safe.

Isabel’s parents also met with her counselor so they could understand more about her self-injury. They were surprised to find out that it creates an effect in the brain that is similar to drug use because it releases endorphins to create a temporary, feel-good feeling. This endorphin release is where it gets its addictive nature and why kids continue coming back to it. Self-injury is different from drug use, however, in that anyone can take drugs and feel good, but if self-injury “works” (provides the endorphin release), that’s an indication that an underlying issue needs to be dealt with.** Isabel’s parents learned what warning signs to look for like small, linear cuts and changes in her mood, behavior, communication, and relationships. Through their meetings with the counselor, they felt more equipped to support her since they could now identify her triggers and anxiety. They used this new knowledge of self-injury to create a safe space for her at home.

Now, Isabel keeps a self-care kit under her bed, filled with tools she has found to keep her safe, like hot tea, fidgets, a yoga mat, essential oils, a journal, and teen coloring books. She also reaches out to friends and family to keep her safe and has even connected with other students at her school who have turned to self-harm to help them learn how to get help.

This is a fictional story that helps give insight into the cause for self-harm.

If you or someone you know struggles with self-harm, please don’t hesitate to contact STARRY counseling offices for help.