For This Child I Prayed 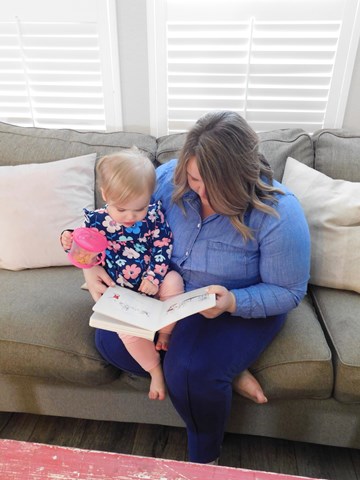 For as long as she can remember, Megan Potts has always dreamed of having a daughter. An only child who lost both of her parents at an early age, Megan was raised by her grandmother and has looked forward to the day when she could pass down a middle name that was weaved into the legacy of the women in her family. “I had always wanted to be a mom, but the marriage-and-having-babies thing was not happening for me,” she remembers. “As I got a little bit older, I knew it was something I still wanted, so I began looking at my options.”

After graduating from college, Megan began a career working in Human Resources at Wag-A-Bag convenience stores in 2008. She was introduced to STARRY through her company’s partnership to raise funds for child abuse prevention, which gave their employees and customers an opportunity to support the mission of STARRY. A work-related tour of STARRY’s Emergency Shelter peaked Megan’s interest, where she saw a 10-month old baby sleeping in her crib. Megan was overwhelmed with compassion and wished she could take her home.

However, Megan was deep in the MBA program at Concordia University and knew that fostering would have to wait. Then her beloved grandmother passed away and Megan’s dreams of having a family of her own were put on hold.

Over the years that followed, Megan continued to develop a relationship with STARRY and stayed involved through her work. As her life calmed down and she excelled in her career as the Human Resources Manager, she revisited the idea of fostering in 2016. “I had a heart for what they do and who they are, so exploring the route of fostering with STARRY felt like a natural fit,” Megan recalls.

Megan met with STARRY’s Foster Care Director to discuss her interest in becoming a foster parent. This meeting was intended to last for only 30 minutes, but ended up lasting two hours. Megan was clearly invested. Shortly after their meeting, she began foster care training. Megan had originally committed to serving in respite care but, after the first night of training, she knew she was all in. She knew it would be hard as a single foster parent, but she wanted to care for children who needed a safe, loving home.

Four days before Christmas 2016, Megan received her first foster placement, a 12-week old baby girl. Megan loved and cared for this precious baby for two months before she was returned to her biological family. While Megan had been happy to support the family and provide a temporary placement, it was hard to let the little girl go. But she knew that reconciliation was the very best thing for that family.

And so Megan continued to wait for the next phone call about a child who needed a home. In May 2017, the call finally came.

Megan went to the hospital to meet a baby girl who was ready to be released from the NICU and into the arms of a loving foster parent. She was born eight weeks early and needed some special assistance, so Megan spent every free moment she had at the hospital learning how to meet this little girl’s needs. Soon, she brought this new baby home.

The trauma-informed training and individualized support that Megan received from the STARRY foster care staff made her feel confident and prepared to face the challenges of fostering an infant. “STARRY stepped in and made sure I had all the support I needed,” she says. “If I needed a break, they showed up to help me.” Through the months that followed, Megan developed a special bond with the baby girl she was caring for. From the first time she rolled over to eating solid foods, celebrating each milestone along the way was a true joy for Megan. When the courts determined that the child would not be going back to her birth parents, Megan knew that she wanted to adopt this precious baby into her own forever family.

In July 2018, on her grandmother’s birthday, Megan’s adoption was made official and she gave her little girl the name Ellie Kay Potts. The legacy of three generations of Potts women live on through Ellie’s middle name. “Actually, this was God’s plan all along. When I look at Ellie, I can see this was His purpose for me the whole time,” Megan says. “Throughout life when things didn’t work out or weren’t happening like I thought they should, I can look back now and see this is what it was all leading up to.”

Even in the throes of the sleepless nights of motherhood, Megan is filled with joy in knowing that she was chosen to be Ellie’s mom. It’s an honor that she doesn’t take lightly. “This little girl is so easy to love. The Lord could have chosen anyone to be her mother. But He didn’t choose anyone. He chose me.”