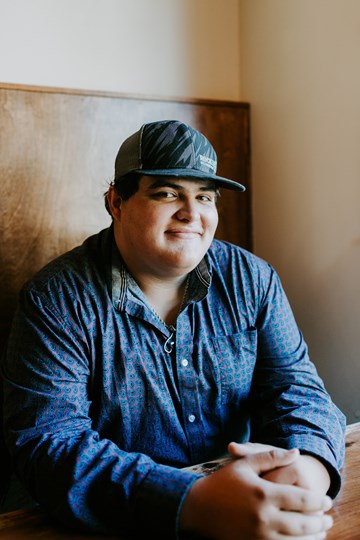 Before experiencing a transforming life at Miracle Farm, Barrett would first go through a painful season of growth. From a young age, Barrett struggled with behavioral issues that put a strain on his relationship with his family and siblings … mainly with his mother. Cheating, lying, and stealing became the new normal for Barrett. It was then that his mom, Staci, began looking for options to help with her son’s rebelliousness.

Growing up, Barrett wasn’t close with his biological father and the absence of a male figure in his life manifested in anger and resentment toward his mom. His disrespectful attitude didn’t stay within the walls of his home either, as it was present in his everyday life at school, too.

When Staci first heard about Miracle Farm, she knew it would be the best option for her son. At the age of 13, Barrett moved to Miracle Farm. “When I first arrived at the Farm, I was experiencing a honeymoon phase as I welcomed the break from home, but that quickly changed,” Barrett recalls.

During the first year of his stay, Barrett was in a constant state of turmoil. He acted out by refusing to do his chores or participating in riding horses and was often given the task of sanding horse stalls. Barrett would make frequent calls to his mom, begging her to come pick him up … but Staci knew it was best for him to stay. While his family came to visit on family weekends and was a constant source of support, they knew that he needed the structure and routine that Miracle Farm offered.

As the months passed, Barrett continued to go through the motions at the Farm. Despite his lack of interest, he gave into riding and, to his surprise, it began to change him. The more Barrett rode his horse, the more he felt in control. He actually began to enjoy it and realized the importance of his personal responsibility to care for his horse.

As Barrett continued to find his way at Miracle Farm, he still got in trouble from time to time. This usually resulted in heart-to-heart talks with Alex Hamilton, Miracle Farm’s President. Barrett responded well to his tough love tactics which, in turn, grew his respect for his authority.

Miracle Farm was the first place where Barrett experienced what it felt like to live in community with others, which helped him develop healthy relationships. He had attended church growing up, but he wasn’t so sure about it when he first got to Miracle Farm. It was through daily morning devotionals and weekly youth group gatherings that Barrett’s heart softened and the Lord helped him heal from his difficult past. Through the care and guidance of his house parents, Barrett learned to trust the love of parental figures in his life.

Despite his rough start at Miracle Farm, Barrett successfully completed the program in just two years at the age of 15. During his stay at Miracle Farm, Barrett’s family had been very supportive of him and made a great effort to be present at every family event. In turn, Barrett visited home as often as he could. These frequent visits were the perfect catalyst for his peaceful transition back home with his family.

“Before Miracle Farm, Barrett was angry and lacked confidence in himself,” shares Staci. “Now I get comments all the time about his incredible work ethic and what a hard worker he is! He has so much more confidence in himself and takes on things that he would previously have run from. Miracle Farm was our miracle. It was a life-changing and life-saving experience for all of us.”

Thanks to the relationships he established at Miracle Farm, Barrett has been able to foster a healthier relationship with his brother and other siblings. They no longer fight and bicker but, instead, they enjoy talking and spending time together. Upon Barrett’s returning home, he and his stepfather have been working to deepen the bond they share and they now plan fishing trips together.

But the relationship Barrett treasures most is the one he has with his mom. “I have a lot more respect for my mom and there is a lot more trust between us,” he shares. “Our relationship is more fun and we genuinely enjoy spending time with one another.”

“Now, we can have conversations and he’ll actually listen to what I have to say,” says his mom. “Sometimes, he even takes my advice! I am so proud of Barrett’s determination and his huge heart. He’s such a kind and loving person, even if he does try to hide it behind a ‘tough guy’ persona sometimes!”

As Barrett is moving on to a new season in life, his hard work at Miracle Farm has paved the way for a successful future. He was awarded a scholarship that allows for his tuition and books to be paid for and he’s begun his first semester at Texas State Technical College this fall. He’s studying diesel mechanics and hopes to work for a large automotive company and even maybe one day own a shop of his own.

“They do something at Miracle Farm that you can’t explain,” Barrett says. “They teach you things that you can take with you throughout life and that is something that I will forever be thankful for.”