A Boy and His Horse 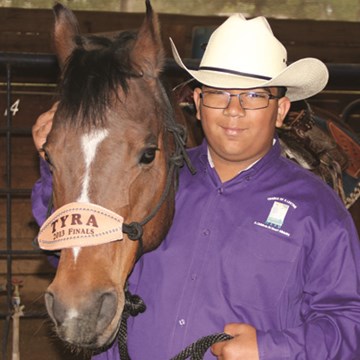 Fifteen-year-old Jonathan arrived at Miracle Farm just six months ago, but with the help of a very special horse, he has already made great strides in his journey to become a man.

“Before coming to the Farm, I didn’t have any experience with horses,” said Jonathan. “But my horse, Homer, has already taught me so much about myself.”

Upon meeting him, Homer lovingly laid his head on Jonathan’s shoulder. At that point, it was pretty evident that Homer and Jonathan were destined to become friends.

“He’s a stubborn horse and he shows me that quality in myself,” said Jonathan. “But every morning, I know he’ll be there waiting for me. He frustrates me but, at the end of the day, he’s my horse and I love him.”

The staff at Miracle Farm has seen evidence in boy after boy that a relationship with a horse can influence not only how he gets along with others but how he views himself. Because a horse is so intuitive, it can tell when a boy is having a bad day or isn’t in control.

For many boys, too, taking care of their horse may be the first time they’ve ever had to take responsibility for anything. Interacting with the horse, the boy learns self-control and leadership. The boys and their horses bond quickly, so a boy’s horse often becomes one of his best friends.

For Jonathan, Homer is a big part of turning his life around at Miracle Farm.

“Jonathan went from student vice president and honor student at his school to being suspended and suffering from episodes of violence,” said Jonathan’s mom, Michelle Vosburgh. “It was then that I realized that Jonathan needed something I couldn’t give him on my own.”

Jonathan agrees that he needed the very things offered at Miracle Farm.

“I didn’t have structure or male role models in my life, both of which I desperately needed,” said Jonathan. “I have a five-year-old sister who looks up to me, but I had no idea what it meant to be a role model.”

With the help of Homer and the Miracle Farm staff, Jonathan is not only learning what it means to become a man, but also learning to heal from the emotional scars from difficult relationships he endured with his biological father and step-father.

“My mom and I are slowly learning together that what happened to us was not our fault,” said Jonathan. “We are learning to forgive, forget and move on.”

Jonathan and Michelle are also learning to communicate without arguing and that sometimes it’s okay to agree to disagree.

“I have noticed such a change in Jonathan since he has been at the Farm,” said Michelle. “He is gentle, quick to hear and slow to speak. I’m excited to see how far he has come in such a short time.”

“Friends are there for a season but family is forever, which is why I’m committed to the work I’m doing here,” said Jonathan.

With Homer’s help, Jonathan is also learning to combat laziness, another struggle he had before coming to the Farm.

“I have been influenced by all the house parents, the dads especially,” said Jonathan. “They have taught me the value of work and what it really looks like to get down and dirty, even when you don’t feel like it, in order to reach your goals.”

“We are so proud of Jonathan and the progress he has made,” said Alex Hamilton, Executive Director of Miracle Farm. “He is a testament to the chance of a lifetime offered to boys at the Farm. It has provided him with a positive opportunity for much needed change.”