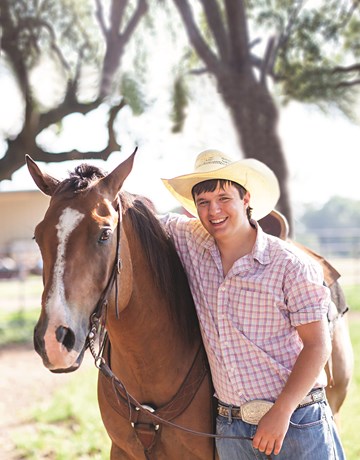 There are at least two things that set Alek apart from the rest of the boys at Miracle Farm. He is a perfect example of the changes that the Farm can make in the life of a teenager.


First, the ways he is different.

He has been at the Farm for three years, longer than any boy now in residence, and about twice the time a boy typically stays.

Then there’s the fact that he doesn’t much care for horses, a staple of the Miracle Farm riding and roping curriculum.

Those aside, there are many ways that Alek is very typical of the boys who benefit from the Miracle Farm environment. Like many boys, he was far behind in school and very much unmotivated when he arrived in 2011.


But he turned things around, completing three years of studies at the on campus charter high school to put himself on schedule to graduate.

And, like many of the young men who complete the Miracle Farm program, when the 18-year-old leaves he will know exactly what career path he wants to pursue.

But one of the biggest changes, the one with the promise of an eternal blessing, is that he gave his life to Christ on June 26, 2011, at a summer camp the year he arrived. He was led to salvation by a Miracle Farm staff member.

Classroom success, career goals and a life committed to Jesus serve to more than balance the early lack of achievement in school and his strong dislike for horses. Alek leaves as his own person, with his boots planted firmly on a path to a future of hope and opportunity.

“I was stubborn,” Alek says, describing the boy who arrived at the Farm three years ago. “I had tunnel vision and ignored everything around me. I wanted to do what I wanted to do. I was going to have it my way, not anyone else’s way. I didn’t think I had a problem.”

Miracle Farm changed things. While still describing himself as “polite, but a loner,” an introvert who likes to keep to himself, Alek says he has learned there is a world outside of his own.

“When I first got here, I didn’t want to be here,” he says. “It took a year for me to open my eyes and look around and see that it is not all about me. My grades went from Cs to Bs to straight As.”

“Alek was not one of those dramatic turnaround stories,” says Executive Director Alex Hamilton. “His was more of a long, slow grind, with small changes over time and then all of a sudden you look back and say, ‘wow, he has come a very long way.’”

After completing courses at the Farm’s on-campus Premier High School, Alek plans to enroll in Blinn College. He
eventually wants to attend Texas A&M University and pursue a career in computers and software engineering.

Alek started working at Independence Coffee Company in Brenham earlier this year and is proud that he recently received a very nice raise. He hopes to continue that job once he starts school.

“He still has hurdles ahead of him to practice the self discipline needed to succeed in college, but he has worked hard at honing those skills,” Alex said.