They Were Meant for Us 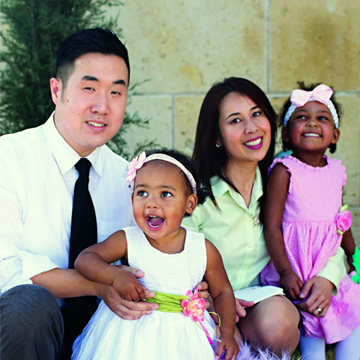 The sound marked the end of a long and emotional journey that ultimately made them “Mommy” and “Daddy” to the two little girls they held in their arms. Love and excitement filled the room as family and friends celebrated the new additions to the family, and with much reason. The union was one that almost didn’t come to pass.

Jon and Grace never wanted to have biological children, but they always wanted kids. When the time came to start a family, adoption had been their plan A.

After moving to Round Rock in 2011, the husband and wife team became licensed foster parents. Fostering allowed them to serve the children in their city while giving them a taste of what to expect as parents.

One morning while Grace was at work, a client became aware of her desire to foster and adopt. He shared the story of his own child’s adoption through STARRY and strongly encouraged her to look into it.

Jon and Grace began working with STARRY as respite caretakers, providing short-term care to children in order to give other foster parents and families a break and to gain experience as parents before accepting their first foster placement. During their first weekend they cared for three boys, ages 2, 4, and 7.

“We were completely tired and wasted afterward,” Grace said. “We didn’t take in kids for a month after that. We were just so overwhelmed.”

Jon and Grace grew as parents as they continued to foster and provide respite care for children until 2013. That’s when they told STARRY that they were ready to adopt. Their case manager, Nita Riggins, introduced them to two young girls named Alexandria Jean (AJ) and Amora, who were in need of a loving home and might be candidates for adoption.

At the time, the girls were in the care of foster parents Shawn and Ellen Briscombe. In a series of respite stays, Shawn and Ellen were surprised at how comfortable AJ and Amora felt around the couple.

“Every time we saw Ellen she’d tell us, ‘These girls were meant for you. You guys are their parents,’” Jon said. “She believed deep down in her soul that we were meant to have them.”

The girls were placed in the care of Jon and Grace in June of 2013, but the road to adoption was not smooth. Their birth mother was willing to terminate her parental rights, but at almost the last minute, she suggested that a distant aunt was interested in adopting the girls. However, after several months it was determined that the aunt’s home was not the best fit for the sisters.

In February 2014, AJ and Amora were officially adopted by Jon and Grace, where they found their forever family.

Now a family of four, Jon, Grace, AJ and Amora are looking forward to a future saturated with joy, family travel, play dates and even a minivan. They are grateful for God’s sovereignty and are completely open to whatever He has in store for them next. But for now, Jon and Grace are focused on enjoying their children and the moments they share together.

“It was amazing to see that when we were losing hope, we had our friends at church, Ellen and Shawn, STARRY staff and everyone around us encouraging us not to lose heart,” said Jon.

“AJ and Amora challenge me every day to think of someone other than myself,” Grace said, “and they just make us happy from the beginning of the day.”